TWO ACTORS WANTED (paid positions): The Minnesota Shorts Play Festival has been growing in popularity since 2009. Playwrights throughout the state and across the nation enter the competition, hoping their short play will be chosen out of the hundreds submitted for a place in the festival. For the third year in a row, a play written by Ruth Furan was chosen to compete. Two years ago her play "Wiener Dog Worries" received the "Best of the Fest" award and last year, "The Dog Park" came in second. She hopes to be able to continue this winning trend by contending strongly this year with her piece, "Food for Thought." Ruth is looking for two actors who would love to join in the competition by taking a part in the production that will play in Mankato either September 10th or 11th in the evening. The characters are "Cosmo" an evil alien leader (think Anthony Hopkins, Silence of the Lambs type character) and "Jack" the Captain of an intergalactic vessel (Jack could also be "Jackie" played by a female). Each player will need to commit to a few weeks of rehearsals- as well as working together with Ruth to design a minimal set, costumes and props for the competition. A $100 stipend is awarded to all plays that contend and Ruth will give each actor half of the stipend for participating. A $100 prize is awarded to "Best of the Fest" winners and if "Food for Thought" would win, Ruth would also give each of the actors half of that prize because of their total awesomeness. Let's bring Lanesboro to Mankato and show them how it's done! Contact Ruth if you are interested, or email bkeithdesigns@yahoo.com and she will pass the message on. Thank you! 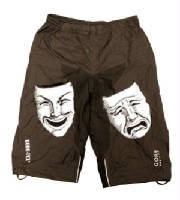