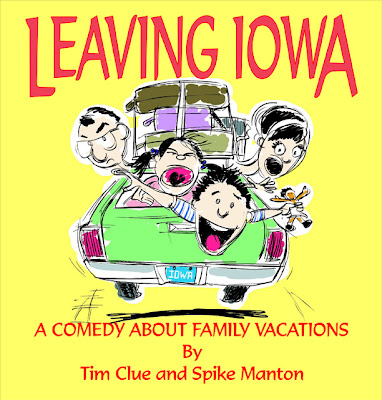 “LEAVING IOWA”
By Tim Clue & Spike Manton
Director: Barbara Benson Keith
Contact: bkeithdesigns@yahoo.com
AUDITIONS: Wednesday and Thursday, January 2 and 3, at 6:30-7:30
Lanesboro Community Center basement, 202 Parkway Ave. S., Lanesboro, MN
If neither of these dates work for you, please contact Barb to set up another audition.
SHOW DATES: Feb. 22, 23, 24, Mar. 1, 2, 3
Two weekends, Friday and Saturday nights at 7:00, Sunday matinees at 2:00
REHEARSAL SCHEDULE: First rehearsal will be on January 7 (full cast read through). Rehearsals vary for actors depending on roles. The schedule will be handed out to the cast on January 7. Rehearsals will be scheduled M-Th generally.

SYNOPSIS: In the hilarious comedy “Leaving Iowa”, successful Boston writer Don, having missed his father’s funeral three years earlier, feels compelled now to return his ashes to his father’s boyhood home. Arriving there, only to discover the family homestead is now a grocery store, Don is faced with a dilemma - what to do with Dad’s ashes? Not wanting to turn around and go back to tell Mom and Sis he failed his mission, Don sets out on a road trip to find the proper alternative resting place for his father’s ashes. The play features the all-too-familiar family road trip flashbacks taken by Dad, Mom, Sis and Don throughout his childhood. Don relives these delightful and disastrous family vacations – like those in all of our memories – through flashbacks from his past and vignettes including an assortment of present-day characters he meets along the way.


DON BROWNING (30s-40s) – the protagonist and narrator; a writer living in Boston, Don embarks on a road trip to bring his father’s ashes to his childhood home. The actor needs charm, sensitivity, and comedic timing as well as the ability to switch between the adult narrator and the child for flashbacks.

DAD (60s)– Don’s father and former baseball coach; he is a classic example of the over-eager road trip dad, dorky and unaware at times, but passionate about “fun” family adventures - a good guy at heart. Dad needs a blend of authority and likeability.

MOM (60s) – Don’s mother is tender and loving, a dutiful wife, willing to go along with Dad on his lackluster vacations. Mom will need the proper amount of quirk and compassion.

SIS (30s-40s)– Don’s little sister; this character appears as the adult version to begin the play but is primarily used in flashbacks as the antagonistic presence in the back seat. The actor will need to portray truthfully an endearing, little girl and have enough of a personality to pull off the painfully annoying sibling.

MULTIPLE CHARACTERS (to be split among a number of actors) – the range of characters in this ensemble is broad; these comedic characters need bold, dynamic personalities and great variety of physical and vocal choices. There are 22 exciting individual characters - some are on for a page, some for a few pages. Rehearsals will be minimal in January for these actors.


"I'm looking forward to seeing you at the auditions! This is going to be a very fun show to do. If you have ever considered being in a play, this is a great way to get started. There are lots of great small roles."
- Barbara Benson Keith (director)

"Leaves you with a smile on your face and a desire to hug your kids." —The Detroit News